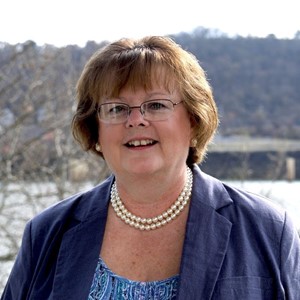 Melissa Sickmund has rarely, if ever, been known to pass up an opportunity to talk about data. Her passion for turning data into information has led to sharing insights with everyone from Peter Jennings to Joe Biden, and fueled the desire for more data from local middle schoolers.

An only child growing up in Montclair, NJ, or what she called “Leave it to Beaver Land…the ultimate suburb,” Melissa Sickmund was a tomboy playing streetball and football with the boys in the neighborhood and following in the footsteps of her mother and grandmother: “both wonderful examples of strong women.” She also found encouragement from the men in her life. “In my work life, for many years my ‘work husband’ was Howard Snyder.” He, and her husband, Ed, whom she met going to University of Maryland rugby games and “who is not intimidated by a strong woman,” have been some of her greatest supporters.

Melissa attended college at the University of Maryland and stayed on for graduate school, studying social psychology and working at the Bureau of Prisons’ research office. She developed an interest in juvenile justice after she became a statistician at the Bureau of Justice Statistics (BJS), analyzing and reporting on the Children in Custody Census. A few years later, after she married Ed, he was promoted and transferred to Pittsburgh. The research field in the justice field is small, but by chance, she landed a research associate position at the National Center for Juvenile Justice (NCJJ), which was based in Pittsburgh ― and she never looked back.

As a researcher, the importance of making accurate information accessible is not lost on Melissa. She takes advantage of every opportunity to do so: “I’ve always been willing to talk to journalists about the stats and what the numbers tell us about the juvenile justice system.” She once had a call from Peter Jennings, ABC News anchor, who was doing a story on the 100th anniversary of the first juvenile court in Cook County, IL. “They were doing a comparison of Cook’s rehabilitative approach and Texas’ more punitive approach.” Melissa had the opportunity to explain the Balanced and Restorative Justice (BARJ) Model, which engages the youth offender, offense victim(s) and the community with the goal of establishing accountability, community safety and competency development. “I pointed out that most states had been embracing a balanced approach and he actually added the information I’d given to him about BARJ in closing the story.”

Another opportunity to spread the word was given to Melissa when she was asked to present to the Democratic Policy Committee of the US Senate at their retreat in Williamsburg, VA. “I was surprised by what they knew and didn’t know about juvenile justice ― and inspired by their eagerness to understand more and have their beliefs challenged.” Soon after she was approached by then-Senator Joe Biden. “He told me that he loved our Juvenile Offenders and Victims report and had a well-worn copy in his hand.” This experience reinforced what Melissa had learned while at BJS: “Policymakers are busy and don’t have time to wade through a lot of material to get to the important stuff. It’s important that as researchers we make things clear so the statistics are not boring.”

Melissa found another captive audience of advocates in a group of middle schoolers calling to ask about juvenile justice statistics. They were pleasantly surprised she was willing to talk with them. “They were calling from the principal’s office in case they needed the school official to step in and vouch that they were serious. What they asked were good questions that showed they had done their research. I told them that they had asked better questions than the ones I’d received at the White House a few days earlier! And it was true.” Melissa was left impressed by their thirst for knowledge and desire to understand what system reforms would really improve outcomes for youths in the juvenile justice system. “It made me realize the importance of disseminating research and statistical information in a way that even kids can understand.”

Melissa has always been one to jump in and say yes to new experiences, so it makes sense that her favorite quote is from Mae West: “You only live once, but if you do it right, once is enough!” She took the advice of her grandmother, who had a career as a teacher at a time when most women didn’t have careers, to welcome serendipity. “I think most of my jobs and advancements in my career have resulted more from chance — being in the right place at the right time and ready to say ‘yes’ — than from careful career planning.” As she points out, “Hell, when I was in college, I didn’t even know jobs like the ones I’ve had existed!” Her advice for young women starting their careers is: “Have a plan. But don’t hesitate to say ‘yes’ when serendipity comes your way.”