Valerie Boykin: From Funeral Parlors to the Juvenile Justice Courts 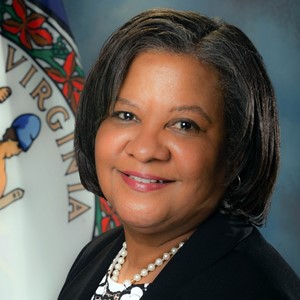 From funeral parlors to the juvenile justice courts, Valerie is a self-subscribed life-long learner, believing that every environment and encounter represents an opportunity for learning and growth.

Valerie’s start in life was not always easy. Born and raised in a rural community in Suffolk, VA, the middle child of three, she was raised by her mother as a single parent after losing her father in a tragic accident. Widowed at a young age, her mother became the head of the household, never complaining while making do with little income, she instilled the ethics of working hard in all her three children and encouraged them to succeed no matter the odds. “We faced lots of challenges during my early years but persevered and were always encouraged to work hard and lean on one another ― family first.” Setting out to make a contribution to the family, Valerie’s first job as a teenager was working in a cousin’s funeral home answering the phones and “hoping to not get a call to pick up a body. Thank goodness no such call came!”

She struggled to find her career path until stumbling on a juvenile delinquency course while at the University of Virginia. She fell in love with the subject and was introduced to the work of juvenile probation through an internship with Offender Aide and Restoration. “After graduating, I applied for jobs all over the state until eventually I was hired as a Juvenile Probation Officer in Franklin County, VA, which was about four hours from my home at the edge of the Blue Ridge Mountains and known as the ‘Moonshine Capital of the World.’ I am not joking. In my first month or so there, the local Sheriff and the federal ATF officials blew up three illegal stills.” It was a cultural awakening for Valerie and she experienced some personal and eye-opening encounters with discrimination, but she also “met some amazing folks who started me on my path to do even more exciting and impactful work.”

The new perspectives she gained from her experience in Franklin County would set her on a path to become a life-long student in the school of learning. “I would encourage young women to always strive to try new things and seek to learn from every new encounter ― put yourself in situations to continue to grow.” Sometimes that means knowing when to change things even if its uncomfortable. “I have had at least a couple of supervisors who have taken the time to serve as mentors for me throughout my career, one of whom even kicked me out of a job. He told me it was time to leave the job that reported to him and expand my horizons. It was a little hard to hear at the time but really paid off.”

As her career progressed, Valerie’s work took her through many roles in juvenile justice ― diversion counselor, family counselor, intake supervisor, statewide parole/reentry manager, Deputy Administrator in the District of Columbia, independent consultant, PbS coach and Deputy Director of Community Programs ― and in many different urban communities and settings. What she continued to see, and what became starkly clear to her, was that everywhere she went, there was a disproportionate number of Black youths represented in the system. “My work in Norfolk, Richmond and DC ― and even now in my current role ― I continue to see an overwhelmingly over-representation of Black and Brown youths. The youths began to look more and more like me.”

While in DC, she remembers looking at Disproportionate Minority Contact (DMC) data developed as part of the State Advisory Group (SAG) plan and having discussions about it with colleagues. “The youths served in my programs were 100% African American. The local detention center only saw one white youth during a particular year who happened to be an out-of-state run-away.” This became a scenario that was replayed throughout Valerie’s career. What was just as upsetting, was that many of her colleagues, including some of her Black colleagues, did not recognize the numbers as disproportional; it was all that they had ever seen. “It sadly seemed normal. It is not normal,” she says. “I have grown to recognize that we must be intentional about this work. First of all, we must pay attention and not be afraid to hit the issue head on. We can look at the data, recognize the situation for what it is, look for the root causes and commit ourselves to addressing the issue in whatever way(s) we can within our scope of control. We are trying to tackle this directly in Virginia and we still have a way to go.”

Valerie’s mother passed away a few short weeks ago. She pays tribute to her mother as the most influential person in her life. “She was a hard worker and sacrificed a lot as she raised us to pursue our dreams. She and my father always wanted more for us than life had provided for them.” Valerie firmly believes that most of the families that come into contact with the juvenile justice system have the same desire for their children – to learn, grow and achieve their dreams. They just haven’t been given the same opportunities and resources as others. “They may not always have the best strategies or know how to pursue positive outcomes; however, that is where we can play a role. Guiding, coaching and empowering families in ways that promote independence from our systems may be our best options to support them.”